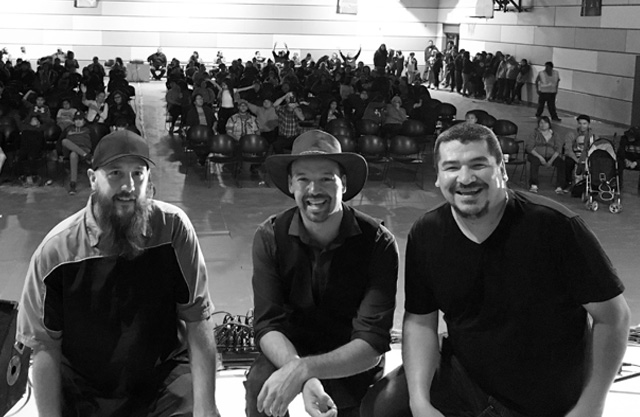 2018 was an amazing year for this group based out of Moose Factory, Ontario. In May of 2018 the group travelled to Germany for their first performance outside of Canada. That same month they won Rock Album of the Year at the 2018 Indigenous Music Awards. The year continued with opening performances with The Sheepdogs, Monster Truck, and The Trews. Three of Canada’s top touring rock acts. In October their single “The Drive” hit #1 on the Indigenous Music Countdown. They wrapped up 2018 with the recording of their third album which is tentatively scheduled for a May 2019 release.

The Relic Kings originated from a 2013 recording project under the name Black Stone. Their debut 2013 eponymous ten track album was recorded at Jukasa Studios in Ohsweken, Ontario during the spring of 2013 and released in June of that year. Produced and Engineered by Juno award winning Darren Magierowski the album was received extremely well. Their single ”Push Me” gained national rotational play on the Stingray Rock Channel as well as on Mainstream Rock Radio stations across Canada. The track “It's Alright" reached #1 on the nationally syndicated Indigenous Music Countdown.

In November of 2015 the group convened for three weeks at Armoury Studios in Vancouver, British Columbia to record with Juno Award winning Producer and Engineer Mike Fraser. Mike Fraser is highly regarded as one of Canada’s top Engineers and he is well known for his work with AC/DC, Aerosmith, Metallica, and Franz Ferdinand. The resulting Armoury album was released in June of 2016. Prior to the release of Armoury the band made the decision to change their name to Relic Kings. This reflected the growth and evolution of the band as well as distinguished it from the numerous groups, businesses, organizations, and shows with the name Black Stone. The singles "Take Me Higher" “Good Times” and "The Drive" received rotational play on SiriusXM 165 as well as on mainstream rock radio stations across Canada. “The Drive” reached #1 on the nationally syndicated Indigenous Music Countdown while “Good Times” reached the Top 5. The Armoury release won Best Rock Album at the 2018 Indigenous Music Awards held at the Club Regent Event Centre in Winnipeg, Manitoba.

The Relic Kings have opened for The Sheepdogs, Monster Truck, The Trews, The Sam Roberts Band, David Wilcox, Sass Jordan, and Honeymoon Suite. They have performed at a wide variety of venues with the Hershey Centre, Yonge-Dundas Square, and The Phoenix Concert Theatre among them. The group has proudly performed at the Aboriginal History Month Celebrations at Yonge-Dundas Square in Toronto and APTN's Aboriginal Day Live in Ottawa. In May of 2018 the group traveled to Europe to perform acoustic sets at the Karl May Festival in Radebeul, Germany.